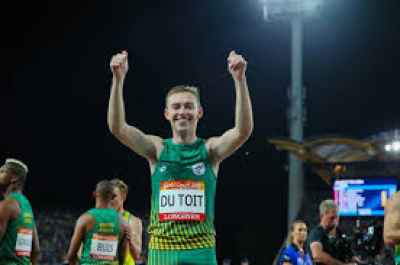 Defending champion Akani Simbine recovered from what he described as a "horrendous" start to finish second behind Kenyan Ferninand Omanyala in the 100m final at the Commonwealth Games in Birmingham, in a repeat result from the African Championships earlier in the year.

Both men had won their respective semifinals earlier in the evening and had Simbine had a better start, he could have provided more of a challenge to the Kenyan who took gold in 10.02 with the South African running 10.13 for his silver.

"My start was horrendous but I’m happy that I was able to fight back and fight my way into the medals and happy that I could put the race together and get the silver," he said after the race.

Simbine had an emotional response earlier in the year after claiming the national title, suggesting that some might have written him off after his fourth place at the Tokyo Olympics.

On Wednesday he explained: "It feels good to always prove the doubters wrong but I'm not doing it for the doubters.

Meanwhile, Para-athlete Charl du Toit was the other South African sprinter to secure a silver medal, finishing second in the T37/38 100m final in 11.54 behind Australia’s Evan O’Hanlon who took the gold in 11.23. Du Toit’s time was a Commonwealth Games record for T37 athletes.

The two-time 2016 Paralympic champion had planned to retire after last year's Paralympics but made the decision to add one more major competition to his glittering career.

"I was planning to retire after the Paralympics, but I just felt that there was still so much more that I had to learn from athletics and my own personal life journey. I think I would have ended with a chip on my shoulder if I had ended at Paralympics," he said of the Tokyo Games, where he didn’t manage to win a medal.

"But I could not ask for a better storybook ending to my career than this… so I’m calling it. This is the end of my athletics career as an athlete, but I’ll definitely be in the mix to help with development or somewhere where I’m needed."

Earlier in the evening, Dom Scott finished seventh in the women’s 10 000m in a time of 31:25.18. The US-based star was in the group of eight that made the break and then six, but couldn’t keep up with the pace as Scotland’s Eilish McGolgan was roared on by the crowd to take the gold in a Games record time of 30:48.60. Kenya’s Irene Chepet Cheptai claimed the silver in 30:49.52 and her compatriot Sheila Chepkirui Kiprotich the bronze in 31:09.46.

"I’ve been struggling with these international races. I think it’s pretty hard when you’re not up at the front of the race to stay engaged and feel like there’s a purpose in your race, but I think I did a good job today so it was a good day,"she said afterwards.

As for the deafening Birmingham crowd, she added: "It was incredible. Eilish was coming down the home stretch when I was on the back stretch. I’ve never heard noise like that before and I tried to use it for myself and channel it into my own finishing lap, but I'm so happy for her."

"It was an awesome race. A non-traditional cross-country race, very high speed, which made it really tactical. But it was a lot of fun,"she said after the race.

The other South African who was meant to compete in the women’s mountain biking, Mariske Strauss, was unable to make the startline after testing positive for Covid.

Meanwhile, also claiming bronze on Wednesday were the Para-bowls duo of Victoria van der Merwe and Desiree Levin in the women's pairs B6-B8. That was after comfortably defeating England’s Michelle White and Gillian Platt 16-7 in the playoff for third spot.

"We're chuffed, very happy to have represented our country and to get a medal," said Van der Merwe after securing the medal.

"We were on top all the time,"added Levin. "We got in early with our first three and, even though they started to catch up, I don't think they actually got on top of us at any stage.

"The run of the green suited us today. Vicky was there all the time. She did wonderful stuff and that made it easy for me to play my game."