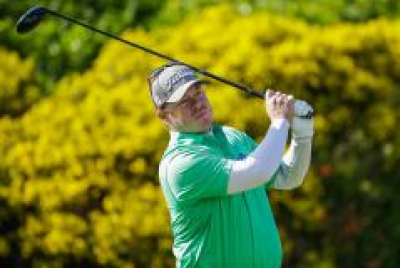 Stellenbosch, Western Cape (4 August 2022) – George Coetzee made a strong start in defence of his Vodacom Origins of Golf title at De Zalze Golf Club when he opened with an 11-under-par 61 to lead by five shots after Thursday's first round.

Coetzee won last year's Vodacom Origins of Golf at De Zalze on the back of an opening 63, and he was in even better form on Thursday with a round of nine birdies and an eagle.

His nearest challengers are the group of Ryan Cairns, Adam Breen, Albert Venter and the in-form Jaco Prinsloo who all opened with rounds of six under par

"It felt great. The course was beautiful. I left a few early putts short but then got the speed right and rolled in some nice putts on the back nine. The greens are so good, but the whole layout of the golf course is beautiful. In these 54-hole events it's so important to get off to a good start in round one," said Cairns.

Jacquin Hess, a member of the Sunshine Tour's Papwa Sewgolum Class for transformation golfers, put himself in contention with a solid opening five-under-par 67.

More in this category: « Everton lose Dominic Calvert-Lewin to injury for six weeks. Mane eager to taste Eintracht Frankfurt atmosphere on Bundesliga debut. »
back to top