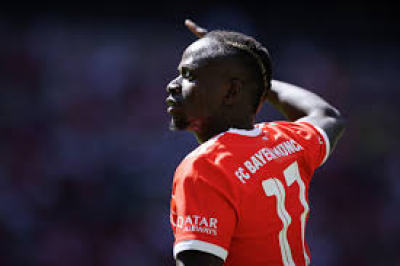 Bayern started their season last weekend by beating RB Leipzig 5-3 in the curtain raiser for the league campaign, with Sadio Mane scoring on his competitive debut to win the Super Cup.

The Senegal star will look to do likewise in his first Bundesliga match on Friday, but the title holders have a difficult first assignment in Frankfurt. Bayern and Eintracht have shared a win apiece in their league meetings over the last two years, and the home side are still on a high after ending last season by lifting a major European trophy once again.

The Eagles were also boosted this summer by the signing of crafty attacking midfielder Mario Götze, who was Germany’s 2014 FIFA World Cup hero and won three league titles with Bayern between 2014 and 2016. Eintracht will fancy their chances of causing an upset then, but - with Mane, Jamal Musiala, Serge Gnabry and Leroy Sane all on the scoresheet against Leipzig - the visitors will take some stopping.

On Saturday afternoon there’s a huge derby match in the capital as 1. FC Union Berlin host Hertha Berlin. The two teams had contrasting fortunes last term, with Union finishing fifth and reaching the DFB Cup semi-finals and Hertha edging Hamburger SV in the play-offs to preserve their top-flight status.

Union won all three derby games in 2021/22 - one of which was in the cup - and have since signed USA international striker Jordan Siebatcheu. Hertha - whose midfielder Kevin-Prince Boateng is staying for one more year to work under new head coach Sandro Schwarz - will hope this season is different.

The late kick-off on Saturday is also a crunch encounter as Dortmund and Leverkusen - who finished second and third last time out - lock horns again. The home side are without Sebastien Haller in attack, but other summer arrivals like Nico Schlotterbeck and Karim Adeyemi should feature. Germany attacker Adeyemi scored on his debut last week in a 3-0 cup triumph at third-tier TSV 1860 München.

Leverkusen, meanwhile, crashed out of the cup - losing 4-3 at third-division SV Elversberg. The visitors won 5-2 in Dortmund in February, however, and in Patrik Schick - who got 24 league goals last season - they have one of the Bundesliga’s best forwards.

As for last season’s cup winners Leipzig, they travel to face VfB Stuttgart on Sunday. Pellegrino Matarazzo's home team could be up against it in that game, considering that Leipzig have this week added Germany international David Raum to a squad spearheaded by 2021/22 Bundesliga Player of the Season Christopher Nkunku.

Elsewhere, two giant clubs return to the elite this weekend. Promoted SV Werder Bremen and FC Schalke 04 are both on the road, with Bremen at VfL Wolfsburg on Saturday and the Royal Blues at 1. FC Köln on Sunday.

In Bundesliga 2, meanwhile, the season is already in full swing. The pick of the Matchday 3 fixtures sees promoted 1. FC Kaiserslautern - German champions in 1991 and 1998 - take on fellow unbeaten side FC St. Pauli. HSV look to bounce back from an early-season defeat when they host 1. FC Heidenheim 1846. And table toppers SSV Jahn Regensburg welcome fellow Bavarians 1. FC Nürnberg.

More in this category: « Strong start for Coetzee at De Zalze golf club in Stellenbosch. Another medal for De Klerk at junior champs in Cali. »
back to top