Another medal for De Klerk at junior champs in Cali. 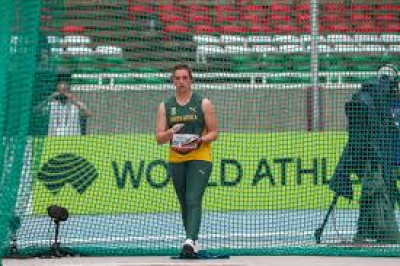 Securing another podium double, Mine de Klerk bagged the bronze medal in the discus throw on Wednesday as she continued to flaunt her versatility on Day 3 of the World Athletics U20 Championships in Cali, Colombia.

De Klerk, who successfully defended her shot put title the day before, took third place in the women's discus throw final, adding to the bronze she earned in the discipline at last year's World U20 Championships in Nairobi, Kenya.

The US-based athlete produced a 53.54m heave in the final, with Emma Sralla of Sweden winning gold (56.15m) and Despoina Filippidou of Greece taking silver (54.48m).

In other track events, youth star Viwe Jingqi did finished sixth in the women's 100m final.

Jingqi stormed over the line in 11.23 seconds, just 0.01 outside the SA U20 record she set in Potchefstroom in March. Jamaican athlete Tina Clayton won gold in 10.95.

Benjamin Richardson, who earned 100m bronze the day before, took second place in his 200m semi-final in 20.39 to progress to the final to be held on Thursday.

Fellow sprinter Lythe Pillay also coasted into the final of his event, winning his 400m semifinal in 45.61.

And there was no trouble for Anje Nel, who won her 400m hurdles semi-final in 57.76, progressing to the final.

In the field, Karmen Fouche landed at 6.15m to finish 10th in the women's long jump qualifying round, booking her place in the medal contest.

"We applaud all our medallists for the sterling achievements and we recognise the gold medal won by Mine. It is also exciting to see the strides being made by most athletes to reach semi-finals and finals. We trust that this will inspire everyone else still in competition," said James Moloi, the President of Athletics South Africa.

More in this category: « Mane eager to taste Eintracht Frankfurt atmosphere on Bundesliga debut. All Blacks make five changes for Championship opener against Boks. »
back to top