All Blacks make five changes for Championship opener against Boks. 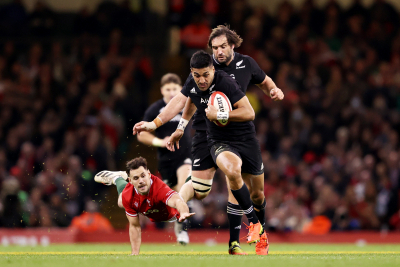 Five changes including a positional switch is the summation of the All Black team that under pressure coach Ian Foster has selected for Saturday’s opening Castle Lager Rugby Championship test in Nelspruit.

One of the most significant changes to the team that lost the deciding test in the three match series against Ireland three weeks ago is injury enforced, with influential All Black lock Brodie Retallick ruled out for some time after fracturing his cheekbone in the loss to the Irish.

That has necessitated a return to lock for Scott Barrett, who played on the flank last time out. Into Barrett's place on the side of the scrum comes Akira Ioane, while there are also two changes to the front row for a game where the scrum could be crucial if the All Blacks aren’t to suffer a third successive defeat and a fifth loss in six starts.

Angus Ta'avao and Samisoni Taukei’aho are selected to start, with the All Black front three sure to miss the experience of Codie Taylor. Nepo Laulala is replaced by Ta'avao in the starting team after the latter completed his suspension for being red carded in the second test against Ireland.

There is just one change at the back, with powerful left wing Caleb Clarke coming in for his first test in two years after recovering from the injury that ruled him out of consideration for selection for the Ireland series. He replaces Sevu Reece.

There are also several changes to the New Zealand bench, with two new players covering front row alongside the experienced back-up hooker Dane Coles, while the highly rated Shannon Frizell is in to take the place vacated on the bench by Ioane’s promotion to the starting team.

"What a great way to start this year’s Rugby Championship. It’s always an exciting tournament to be part of," All Black coach Foster said in announcing the team.

This year's draw means we have a massive challenge of two games here in South Africa. We have settled in well in Mbombela and are preparing for what is always an intense game against our old foe.

"Many of our squad are here in South Africa for the first time. This gives us another opportunity to add new experiences and grow our game."

More in this category: « Another medal for De Klerk at junior champs in Cali. Thierry Henry is voted the greatest player of the Premier League era. »
back to top