Thierry Henry is voted the greatest player of the Premier League era. 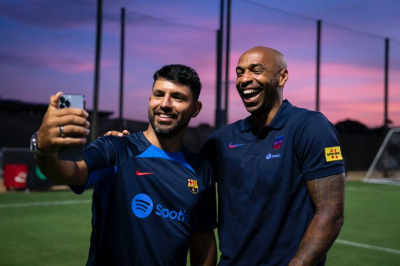 Thierry Henry has been voted as the Premier League's greatest ever player by a survey of football fans.

Betfair conducted a survey with YouGov and asked over 1,000 football fans to decide the best player of the Premier League era ahead of the competition's 30th anniversary.

Arsenal legend Henry pipped the likes of Cristiano Ronaldo and Mohamed Salah to clinch the award, with the Frenchman earning 15% of the vote.The former striker netted 175 goals in 258 Premier League appearances and spearheaded the Gunners to two league titles - including the much-heralded invincible season in 2003-04.

Ronaldo finished in second place, with the 45-54 age group voting for the Portuguese international more than any other player.

Premier League all-time top goalscorer Alan Shearer came third, while Eric Cantona and Steven Gerrard made up the rest of the top five.

The Egptian international came seventh in the voting after scoring a remarkable 156 goals in 254 appearances for Jurgen Klopp's side.

Yet there is a feeling that Salah may finish higher at the end of his career after recently signing a long-term deal at Anfield.

Aside from Ronaldo and Salah, the only other active player inside the top 20 of the voting was Manchester City's Kevin De Bruyne.

The midfielder finished in eighth place and has inspired the Citizens to four of the last five Premier League titles. And the Belgian will be hoping to increase his tally, as City start their title defence against West Ham on Sunday.