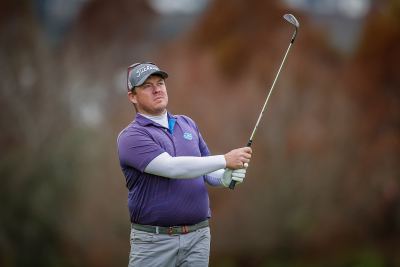 Stellenbosch,Western Cape (5 August 2022) – George Coetzee tightened his grip on the Vodacom Origins of Golf at De Zalze Golf Club and will take a two-stroke lead into Saturday's final round of this Sunshine Tour event.

Coetzee signed for a second round of five-under-par 67 to move to 16 under par overall as he looks to successfully defend his title and claim the 15th victory of his career.

But England's Joe Long could still have a say as the 2020 Amateur Championship winner made a big charge on Friday with a sublime 10-under-par 62 that lifted him to 14 under par overall. Long even made two bogeys in that 62.

And six strokes back, Albert Venter is hunting his second win of the season after his triumph in the FBC Zimbabwe Open in May. Venter moved into contention with a second round of 68.

Coetzee was five shots clear at the start of the round but was held back by a double bogey on the par-three ninth, and was kept from running away with the tournament by Long's round of the day.

More in this category: « It's Ridiculous,We've won the World Cup, but not beaten All Blacks at home'|Kolisi. Schmeichel has 'high ambitions' for new club Nice. »
back to top