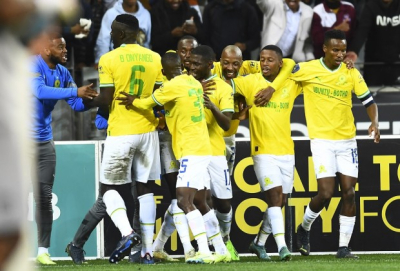 Mamelodi Sundowns began the defence of their DStv Premiership title with a 2-0 win over Cape Town City at the DHL Stadium on Friday evening.

Sundowns produced a strong second-half performance after being frustrated by the Citizens in the first half. Two second-half goals from Aubrey Modiba and Themba Zwane earned Masandawana a win over the stubborn hosts.

City were left to rue their missed chances in the first half when they were looking dangerous on the counter-attack. It is now back to the drawing board for the Mother City side who couldn't score on the night.

The Citizens' tight defence was able to contain Masandawana's dangerous attack which was led by the lethal Peter Shalulile. Most of the balls which were played in the City box were either cleared away or gathered by goalkeeper Hugo Marques.

The hosts looked dangerous on the counter-attack, especially on the right-hand side with Khanyisa Mayo creating problems for Sundowns' defence. Thabo Nodada and debutant Luke Daniels failed to hit the target from close range after connecting with top-notch crosses from the right.

Sundowns' only decent chance in the first half fell for Haashim Domingo, but the attacking midfielder failed to beat keeper Marques from close range following a good move by the Tshwane giants and the score was 0-0 at the interval.

The defending champions came back an improved side in the second half and they managed to open the scoring. The visitors were awarded a free-kick after Domingo was fouled near the City box and Aubrey Modiba scored with a fabulous strike from the set-piece to make it 1-0 to Sundowns in the 61st minute.

Sundowns were soon 2-0 up two minutes later after a good move by the visitors with the influential Domingo, who was having a great game, being involved. The creative player played a defence-splitting pass for Themba Zwane who made no mistake as he beat Marques to make it 2-0 to Sundowns.

The momentum was with the Citizens in the latter stages of the match with coach Eric Tinkler having introduced attackers Mogamat May and Kajally Drammeh.

However, goalkeeper Ronwen Williams pulled off decent saves to deny the City duo to ensure that the game ended in a 2-0 win in favour of Sundowns.

More in this category: « Schmeichel has 'high ambitions' for new club Nice. Sadio Mane scores on debut as Bayern rout Frankfurt. »
back to top