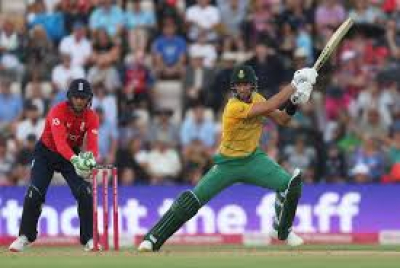 Wayne Parnell claimed a career-best 5/30 as he led South Africa to a comfortable 44-run victory over Ireland in the second T20I at the Seat Unique Stadium in Bristol on Friday night.

The Proteas, therefore, wrapped up the itw Universe T20I series 2-0 following their 21-run victory in the first match on Wednesday. They now turn their attention to the test series against England. Ireland, who have lost their last eight T20Is, now seek a return to form in their forthcoming series against Afghanistan.

For Ireland, chasing South Africa’s total of 182 for six, only Paul Sterling (28 in 16 balls) and Harry Tector (34 in 31 balls) offered serious resistance on a slow, two-paced pitch that made fast-scoring difficult. Tailender Barry McCarthy did, however, have some fun at the death as he cracked 32 in 19 balls before Ireland were finally dismissed for 138 with seven balls to spare.

Parnell grabbed two wickets in consecutive deliveries in his opening over – the second of the innings – to reduce Ireland to three for two wickets. First, he had skipper Andy Balbirnie caught off a leading edge at cover, then he saw off Lorcan Tucker, so impressive in the first T20I with 78, first ball as he drove to mid-on.

The left-arm paceman then returned to claim the wickets of Tector, and then George Dockrell and Andy McBrine in consecutive deliveries, to return career-best figures as well as his 50th scalp in T20I cricket.

Parnell was assisted by Tabraiz Shamsi, who on occasion turned the ball prodigiously, and Dwaine Pretorius (3/33) as the Proteas cruised to victory.

Earlier, South Africa’s innings had proceeded in fits and starts after Ireland won the toss and put them in to bat.

Part of the problem was the use of the same pitch as in the first game on Wednesday. The result was a two-paced surface with the ball either not coming onto the bat or skidding through. In addition, Ireland helped their own cause, particularly in the first half of the South African innings, by bowling with good discipline.

Quinton de Kock's struggles – he has now failed to score a T20I half-century in 11 innings – continued as the left-hander hit seven off 10 balls before he was caught on the midwicket boundary after mistiming a pull off paceman Barry McCarthy.

Rassie van der Dussen couldn’t get to grips with the pace of the pitch or the Irish bowling and mistimed a desperate drive to long-on off offspinner Andy McBrine after crawling to four off 14 balls.

Meanwhile, Reeza Hendricks was the early mainstay of the innings, striking some superb drives, and he was given explosive assistance by Aiden Markram who smashed 26 off the 12th over from McBrine, including three sixes.

Back came Ireland with a vengeance as legspinner Gareth Delaney bowled Hendricks for 42 and then induced Markram (27 off 10 balls) to mistime a pull to deep midwicket where Tector took a good catch diving forward.

The Proteas looked in trouble on 85 for four in the 13th over, but David Miller – restored to the team and the captaincy after recovering from back spasms – and Heinrich Klaasen punished some "slot"bowling by the Irish to add 71 in 29 balls to enable the innings to surge forward again. This reached a crescendo in the 17th over bowled by McCarthy that leaked 28, most of them to Klaasen.

Klaasen (39 off 16 balls) finally perished in the outfield but three hugely expensive overs had realised a total of 74 runs before his departure. Dwaine Pretorius provided some late acceleration to clobber 17 off seven balls as he and Miller (32* off 20 balls) provided a late flourish to the innings. Nevertheless, the Irish finished well when McCarthy did remarkably well to restrict Miller and Wayne Parnell to four runs off the final over.

Miller said after the match that intense competition within the team was healthy in the lead-up to the World Cup. "It's a good problem to have with the World Cup coming. Guys have stood up and contributed and it's healthy to see it coming through. It's really nice to contribute as captain. Given how we've played in the last 18 months, we're going to be a force at the World Cup."