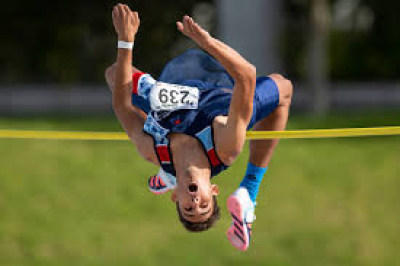 Turning out among the favourites in the men's high jump final on Friday night, Brian Raats delivered well by reaching the podium on Day 5 of the World Athletics U20 Championships in Cali, Colombia.

Raats sailed over the bar at 2.10m, and while four other athletes cleared the same height, he managed to clinch the silver medal on count back, sharing second place with Bozhidar Saraboyukov of Bulgaria.

Brandon Pottinger of Jamaica won gold as the only athlete in the line-up to get over 2.14m.

Fouche set a personal best of 6.31m, and though she fell short of the podium in an event won by Bulgaria's Plamena Mitkova (6.66m), she would have been pleased with her result.

In other events, Aron Alvarez Aranda was 11th overall in the men's discus throw qualifying round with a best attempt of 56.88m, booking his place in the final to be held on Saturday's last day of competition.

The SA women's 4x400m relay quartet - Precious Molepo, Anje Nel, Colene Scheepers and Simone de Wet - ended fourth in their heat in 3:56.52. While they broke the South African U20 record, they missed out on a place in the medal contest by 0.27.

There was no luck for youth prospect Viwe Jingqi, who did not finish the women's 200m final after taking sixth position in the 100m sprint earlier in the week, and the national men's 4x100m relay team, who were disqualified from their final.

After five days of competition in Cali, the SA team were lying fifth in the overall standings with five medals (two golds, one silver and two bronze).

"Every medal counts and we appreciate what Brian did to reach the podium which is the primary mandate of every athlete. Well done to him, coach and support staff.

"We are, of course, not happy that we received a disqualification, but life goes on. We wish our last contestants the best of the competition," said Enoch Skhosana, the Acting President of Athletics South Africa.

More in this category: « Tuchel confirms the 'Curse of The No.9 Shirt' is alive and well at Chelsea. Ethiopian runner Tadu Nare claims another Spar 10km race in Tshwane. »
back to top