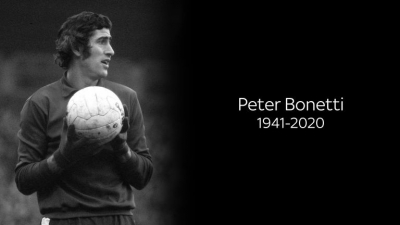 He was part of England's 1966 World Cup-winning squad but was unused throughout the tournament.

Bonetti made seven England appearances and featured in the 1970 World Cup quarter-final defeat by West Germany.

As well as playing 729 times for Chelsea, Bonetti also had brief spells at American side St Louis Stars, Dundee United and Woking FC during a career which spanned more than three decades.

He played an important role in Chelsea's FA Cup final victory over Leeds United in 1970 and the club has described "his superhuman attempts to thwart the opposition" in front of a TV audience of more than 28m people in the UK.

Bonetti also won the League Cup in 1965 and the Uefa Cup Winners' Cup in 1971 with Chelsea.

Later in life, Bonetti took up roles as a goalkeeping coach at Chelsea and England as well as working with Kevin Keegan at Manchester City, Newcastle United and Fulham.

FA Chairman Greg Clarke said: "I am very saddened to hear that Peter Bonetti has passed away. Part of our 1966 World Cup-winning squad, he was not only a wonderful goalkeeper but also a hugely-popular figure in the English game.

"Of course, he served Chelsea to distinction over many years, and as a young boy I can remember watching his superb performance in their 1965 League Cup win against Leicester City. My thoughts are with his family and friends today."

Tweet
More in this category: « African Champions League have been postponed due to the coronavirus outbreak. Roy Hodgson believes the current Premier League season must be completed. »
back to top