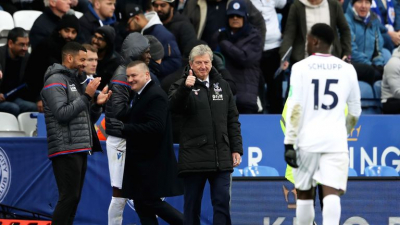 Crystal Palace Manager Roy Hodgson is keen for the season to finish even if it means a shorter summer break for players and staff.

He told Crystal Palace’s official website: “Everyone is in total agreement we need an end to this season.

It’s now been one month since our players last kicked a ball, and in that time life as we knew it has been turned on its head.

“Ideally our players would have three or four weeks’ minimum to prepare for the first match back, but I accept there may have to be a squeeze on that time frame.

It may also mean that we have to play our nine remaining matches in a shorter period of time than we normally would have done, and subsequently receive a shorter break between the seasons.

There is absolutely no doubt that football pales into insignificance at a time such as this. This lockdown will have a major effect on people’s mental health and well-being, and I hope that there is positive news soon, especially in relation to us being able to return and finish off the season.

The season was originally suspended until April 30 but that has since been extended indefinitely, with the resumption of play now contingent on medical advice and government support.

Palace are currently 11th in the league table.

Meanwhile England's Football Association (FA) has offered Wembley Stadium and St George's Park, the National Football Centre, as venues to help the Premier League complete the season, the Times has reported citing a source familiar with the matter.

Wembley could host multiple matches on the same day while limiting travel between venues once restrictions are eased, the report said, adding that fans were unlikely to be allowed to attend.

St George's Park, which has a hotel with 228 guest rooms on site as well as 13 pitches, five of which are floodlit, could be used as a quarantined training centre, the report added.

Tweet
More in this category: « Former England and Chelsea goalkeeper,Peter Bonetti dies aged 78 Italian Football Federation hopes that players can be tested for coronavirus at the start of May. »
back to top