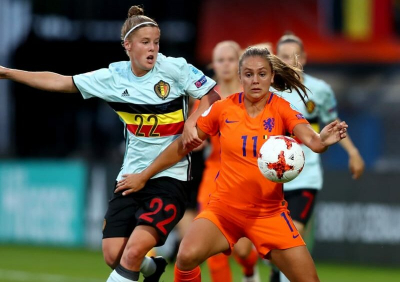 Uefa has confirmed that the 2021 Women's European Championship will take place from 6-31 July 2022.

The tournament, to be held in England, has been pushed back after the men's European Championship and the Tokyo Olympics were both postponed until 2021 because of the coronavirus pandemic.

The intention is to use the same venues as the original tournament.

Uefa president Aleksander Ceferin says the move ensures the competition will get the "spotlight it deserves".

He added: "By moving to the following year, we are ensuring that our flagship women's competition will be the only major football tournament of the summer."

Uefa's chief of women's football, Nadine Kessler, said: "This decision puts us in a position to deliver a tournament that attracts global attention, maximises media coverage and increases stadium attendances, and is therefore helping us to meet our core objective of inspiring the next generation of footballers."

"2022 also allows for further promotion and partner activation, which would have been much more difficult in what is now a crowded summer in 2021."

England are set to open the tournament Manchester United's Old Trafford stadium on 7 July, one of 10 venues used across the country, with Wembley hosting the final.

Moving the Euros to 2022 will avoid two women's tournaments in the same summer.

Three European teams - Great Britain, the Netherlands and Sweden - have already qualified for the Olympics.

As it stands, the finale of the Women's Euros will coincide with the start of the Birmingham 2022 Commonwealth Games, which are held from 27 July-7 August.

Uefa says there were "extensive discussions" with Birmingham 2022 organisers.

The Football Association's director of women's football, Baroness Sue Campbell said: "We are also grateful to the Commonwealth Games Federation for its collaboration as we sought to confirm these new dates, and look forward to working together to showcase the best of women's sport across both of our events."