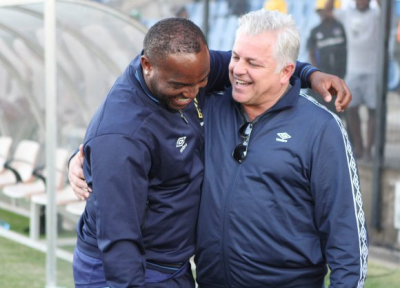 In an exclusive interview with Sport24, Comitis said that he is aware of the financial difficulties ahead for his club due to the coronavirus.

Comitis has revealed that some sponsors have not paid the club due to the financial damage the coronavirus has caused the economy.

However, with the current situation, discussions continue between the Premier Soccer League (PSL), the South African Football Association (SAFA) and various other entities to make a call on the 2019/20 season.

“You cannot expect the clubs that are at the bottom of the Absa Premiership to just accept relegation and the ones that are top of the NFD (Glad Africa Championship) to say, ‘well we’ll just go again next year’ when there are five, six games left,” he said. It will be completely unreasonable. At the same time, you can expect a legal case for damages and losses”.

The PSL has been suspended since 16 March with no indication when it will resume, but the board of governors has said they hope to resume the 2019/20 season by June.

Comitis added that, for the time being, players and staff will be continued to be paid in full.

“When you cut salaries, it will still be a lot of money, whether you take 20% or 30%, it’s still a lot of money by normal standards. Everyone has their own commitments. At this stage, we are focused on ensuring we can put food on people’s plates”.

“We rely on certain revenues that come to the club on the fact that you are active on TV and are able to give exposure to sponsors and that. You don’t know at what point they will pull the plug. In order to survive, you need to take precautions and put scenarios in place”.

"Once sponsors decide that this is not working for them, then we’re in serious trouble and whilst we may have contracts or not, at the end of the day you can only squeeze so much out of a lemon."

Tweet
More in this category: « F1 plan to start season in Austria on July 5 after French GP is called off. FIFA propose use of five substitutions to deal with fixture congestion. »
back to top