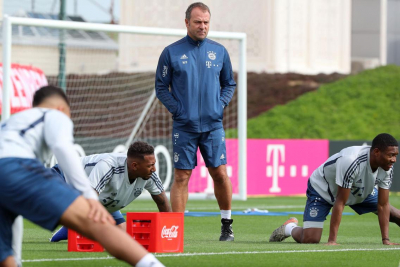 Chancellor Angela Merkel has confirmed that the German Bundesliga season can resume this month.

It will become the first major league in Europe to return to competition, with a date for resumption to be confirmed by the German Football League (DFL) on Thursday.

All matches will be played behind closed doors.

With nine games remaining, Bayern Munich are top of the table, four points above Borussia Dortmund.

Bayern chairman Karl Heinz Rummenigge said: "I would like to thank the politicians for giving today's decision [and for] the opportunity to finish the Bundesliga season.

"We are now looking forward to resuming play, ideally from mid-May. This ensures that the sporting decisions are made on the pitch.

"I appeal to everyone involved to follow the requirements, which are the basis for resuming games, in an exemplary and extremely disciplined manner."

"It is associated with a great responsibility for the clubs and their employees to implement the medical and organisational requirements in a disciplined manner.

"Games without spectators are not an ideal solution for anyone. In a crisis threatening the very existence of some clubs, however, it is the only way to keep the leagues in their current form."

The announcement comes a day after clubs in the top two German divisions returned 10 positive results from 1,724 coronavirus tests.

Germany has banned large events with crowds until 24 October, so games will be behind closed doors, but the DFL has developed a health and safety plan that would see only about 300 people or near the pitch during matches, to minimise the risk of infection.

According to official figures, just under 7,000 people have died in Germany from coronavirus, a much lower figure than in other western European countries including the UK, Italy, France and Spain.

It was also announced on Wednesday that the Turkish Super Lig will resume on 12 June with the aim being to complete the season by the end of July.

The Croatian top-flight is also poised to resume - without spectators - with cup ties to take place on 30 May, followed by league action on 6 June, pending government approval.