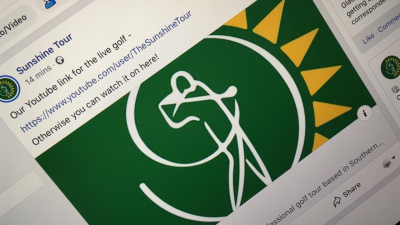 The Sunshine Tour has grown its digital footprint and is busy reaching a new community of golf fans through its pioneering Sunshine Tour Virtual Golf Challenge.

The Tour launched its online gaming presence with great success during the national lockdown, and in the absence of live golf as a result of COVID-19.

Using The Golf Club Game as its gaming platform, the Sunshine Tour Virtual Challenge has engaged both the fans and professionals with a new way of consuming tournament golf, and which is also offering value for Tour sponsors during a time when there is no traditional golf.

Every week, a new challenge is issued whereby Sunshine Tour fans are encouraged on social media to vote for who they would like to see play each other in a nine-hole online match. The matches take place every Sunday afternoon and are streamed live on the Sunshine Tour's You Tube channel, and will soon also be on Facebook and Twitch. This Sunday's match will feature big hitters Wilco Nienaber and James du Preez.

But the great differentiator is that the fans can log in and be a part of the action as they not only listen to the hilarious and highly competitive comments of the professionals competing against each other, but can also ask questions of their favourite pros which they answer during the game.

Tour sponsors are also given an opportunity to have their branding on the live stream.

The response to the Sunshine Tour Virtual Golf Challenge has been incredibly positive as it has significantly increased the Tour's digital footprint and following. In the past week, the Sunshine Tour's Facebook account saw a 579% increase in its "audience reach", with substantial new growth in the critical market of 18-24 year olds. In total, all of the content promoting the most recent match between Brandon Stone and Haydn Porteous, including the match itself and highlights, reached a cumulative audience of over 100 000 on Facebook alone.

It has even resonated with the mainstream media as daily newspapers have requested interviews with the various weekly winners, and highlights of the matches have been televised on various television channels, which is a first for South African professional golf.

Through the Sunshine Tour Virtual Golf Challenge, professionals and fans can still experience that Sunday afternoon final-round feeling of a back-nine challenge to win a tournament.

Tweet
More in this category: « Ferrari sign Sainz & Ricciardo goes to McLaren for the 2021 Formula 1 season. The 2020 Comrades Marathon has been cancelled. »
back to top