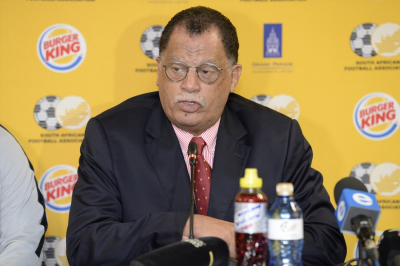 The South African Football Association (Safa) has hit back at former chief executive officer (CEO), Dennis Mumble, saying that he has made “contradictory statements in respect to events during and after his tenure as Safa CEO.”

Last week, Mumble submitted a document to the association’s national executive council criticising the way in which Safa president Danny Jordaan was running the organisation.

In a statement released by SAFA on Saturday, the organisation responded.

Mumble accuses SAFA of various violations as former CEO, but praises SAFA in his reports (both financial and activity) placed before the NEC and the General members in the Congress while in office.

These allegations are denied.

The idea that SAFA is collapsing is a blatant lie. SAFA is enjoying its most successful period:

U20 Men’s National Team qualified for two successive World Cups in 2017 Korea and 2019 in Poland.

We have more than 60 players playing abroad both Men and Women.

SAFA continues to make huge investments at the National Technical Centre at Fun Valley in a bid to make it a world class technical facility and improve the international competitiveness of all our teams.

On the expiration date of his contract on 31 March 2018 the NEC on a proposal of Mr Abel Rakoma and seconded, decided “the contract of the CEO will be extended by six months to ensure that he oversees the preparation of the Extraordinary Congress and the Elective Congress” Resolution #2 Extraordinary Council Meeting of 28 March 2018.

The Confederations of African Football (CAF) has on many occasions approached SAFA to host tournaments, the host countries will have failed to undertake. Article 2.9 of the SAFA Statute ‘to manage international sporting relations connected with association in all its forms.”

As a result, SAFA has a proud history of coming to the aid of the Region and the continental body among others.

In 1996, Kenya was not ready with 6 months to go and SAFA accepted to host the AFCON’96. There was definitely no budget for this event. The President then was the late Mr Solomon ‘Stix’ Morewa.

In 2013, Libya could not host the AFCON and South Africa accepted to host both the AFCON 2013 and CHAN in 2014. Mr Kirsten Nematandani was the President and Mr Dennis Mumble was the CEO and this tourney was neither planned nor budgeted for.

In 2016, CAF again approached SAFA through CAF Executive Member Dr Molefi Oliphant and Mr Dennis Mumble wrote a letter to this effect. The tournament is praised as a success by the CEO Dennis Mumble and he signed the Audited Financial statements on the subsequent end of year annual financial results.

The Local Organising Committee was chaired by NEC member Poobie Govindasamy and the tournament was delivered by Mr Russell Paul with SAFA staff fully involved.

In the Audited Financial Statement of 2015-2016 in his report to the SAFA Congress, Mr Mumble reported that: “We continue to prepare our National Teams for what promises to be an eventful Rio Olympic Games despite the fact such preparation required an investment beyond what had been budgeted. Similarly, we were also faced with hosting a very successful CAF Futsal Africa Cup of Nations in the period under review without commercial support. Those activities remain primarily responsible for the current position that we are reporting on this year.”

While this remains the prerogative of the Association President, the appointment of HODs has been done through a systematic process that almost all of SAFA NEC members have been HoDs at one time or the other.

The issue of the Association appointing PR companies is well documented and is a practice undertaken by various government departments and private companies.

The appointment of Grit Communication was not for personal benefit but to help spruce up the general image of the Association.

The relationship with SAB is very good and we have just signed a 4-year deal late last year and this new deal ends on 30 October 2023.

This matter was thoroughly dealt with by the Government who made it clear through the then Minister of Sport, Fikile Mbalula that the Diaspora Fund was a government directive.

SAFA was then asked by the Government never to entertain this matter again.

The SIYAYA contract presented opportunity for the first black company to be involved in sports broadcasting and it is on this basis and the huge benefit projected that SAFA engaged and signed the contract.

The application for broadcasting license had not been approved and the infrastructure was not in place at the time.

We therefore agreed with SIYAYA that they will cede their SAFA free-to-air rights to the SABC.

The 2010 Legacy Trust is jointly managed by FIFA and SAFA, with the world football governing body owning 60% and SAFA 40%.

The purchase of Fun Valley (now SAFA National Technical Centre) was unanimously approved by the SAFA NEC and the Legacy Trust who went to see the establishment before it was purchased.

The second leaked letter, and SAFA is informed that a third letter is on the way, is an attempt to create an atmosphere of instability in the Association.

This ironically comes at a time when there are no activities in South African football and therefore there cannot be instability.The ultimate aim of these individuals is to create the impression that there is need for an investigation in the organisation. This again comes during the period of lockdown after SAFA received glowing reports at its Congress held on the 8 December 2019 at the Sandton Convention Centre.