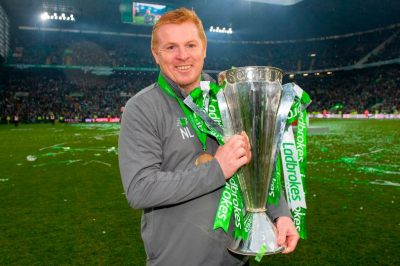 Celtic have been confirmed as Scottish Premiership champions for the ninth season in a row - and Hearts relegated - after the SPFL ended the season.

The decision was taken at a board meeting on Monday after the 12 clubs agreed at the end of last week that completing the campaign was unfeasible.

Average points per game played has been used to determine final placings.

The only change to the table from when football was halted on 13 March sees St Johnstone go sixth, above Hibernian.

Celtic were 13 points ahead of nearest challengers Rangers - having played a game more - when the season was put into abeyance. Like most teams in the division, Neil Lennon's side still had eight games to play.

Hearts were four adrift of Hamilton Academical at the bottom with a possible 24 points available.

However, the Tynecastle club do hold slim hopes of a reprieve after chair Ann Budge was given approval to work on a proposal for temporary league reconstruction, which would involve expanding the top flight.

SPFL chief executive Neil Doncaster said the "clear and unanimous view" of the club was that the games could not be played and that the league can now pay out around £7m of prize money immediately.

"The focus will now turn to how we get football up and running again safely as soon as possible," he said. "Nobody should be under any illusion as to how complicated and difficult a challenge it will be to return Scottish football to normality."

The decision was taken by the SPFL board after a controversial April vote - backed by 81% of clubs - granted them the power to do so should they deem the 49 outstanding games unplayable.

Football at all levels in Scotland is suspended until at least 10 June and Uefa had asked associations to either declare their season or lay out their resumption plans by 25 May.

Tweet
More in this category: « Bundesliga: Lewandowski and Pavard give Bayern Munich a comfortable win. The family of Nkanyiso Mngwengwe revealed the cause of his death. »
back to top