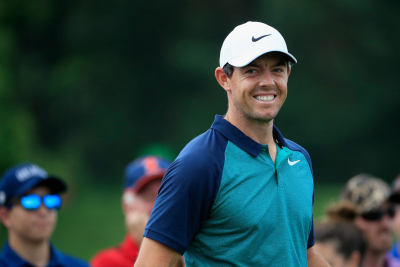 Rory McIlroy delivered the big-money shot as live golf returned to television for a Skins game that raised more than $US5 million ($7.8m) for coronavirus relief funds.

The world number one was partnering Dustin Johnson in a skins game against Rickie Fowler and Matthew Wolff at Seminole Golf Club, Florida, USA. McIlroy and Johnson ended up winning.

In keeping with social distancing guidelines, there were no fans at the course and the players competed without caddies.

"It's only been nine weeks since the Players," said Northern Irishman McIlroy. "It feels much longer than that. We just went through an unprecedented time so it was nice to get back out there.

"It's a different setting than what we're used to, but to get those competitive juices going again, it was nice to feel it."

And those juices were clearly evident on the sudden death tie-breaker.

In a skins game, players compete for money on each hole, with the prize carrying over to the next hole if there is no winner.

The results from today's match that matter most. #DrivingRelief pic.twitter.com/4jZeF4jfRV

Next is an exhibition match on May 24 at Medalist Golf Club in Hobe Sound, Florida, where Tiger Woods will team up with NFL great Peyton Manning to face Phil Mickelson and six-time Super Bowl champion Tom Brady in Champions for Charity – which will raise $US10m for COVID-19 relief efforts.

The PGA Tour will return, with no fans, on June 11 with the Charles Schwab Challenge at Colonial in Texas.

Tweet
More in this category: « The family of Nkanyiso Mngwengwe revealed the cause of his death. Premier League clubs' training return given go-ahead from Tuesday. »
back to top