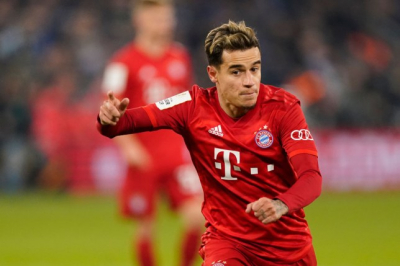 Bayern Munich beat Eintracht Frankfurt 5-2 at home, while Dortmund beat Wolfsburg 2-0 away from home earlier in the day.

Bayern takes a four-point lead over Dortmund into Tuesday's match between the two teams.Both the sides looked dangerous and sloppy today but both the German giants won their respective games.

Strikes from Thomas Mueller and Robert Lewandowski just before and after the interval put Bayern at ease and the game looked done and dusted.

Martin Hinteregger was the key as he grabbed two quick goals inside three minutes to leave Bayern looking a lot more insecure.

But Alphonso Davies allowed them to breathe a little easier when he grabbed their fourth with a little under 30 minutes remaining. Sadly for Eintracht, Hinteregger’s good word was undone when he bundled the ball into his own net to restore Bayer’s three-goal advantage and allow them to ease to victory.

Meanwhile the Brazilian international Philippe Coutinho will leave Bayern this summer after the Bundesliga giants chose not to activate the buyout clause for the Barcelona loanee.

Bayern Munich chairman Karl-Heinz Rummenigge has disclosed that Coutinho would not make the move permanent as the buyout clause was invalid.

Elsewhere, Borussia Moenchengladbach’s 20,000 fans were silenced during the 3-1 loss to Bayer Leverkusen.

Tweet
More in this category: « La Liga Can Restart Behind Closed Doors on June 8. Two more positive cases after second round of coronavirus testing in the Premier League. »
back to top