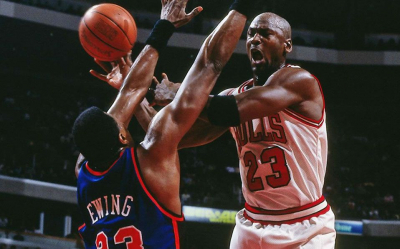 Michael Jordan announced that he will donate $100m (£78m) to groups fighting for racial equality and social justice.

The NBA legend said in a statement that he and his Jordan Brand would distribute the money over 10 years.

The money will go to a number of organisations in a bid to tackle "ingrained racism".

It comes in the wake of protests breaking out across the US and around the world following the death of George Floyd as he was restrained by police.

Floyd, an unarmed black man, died on 25 May after a white police officer, since charged with murder, knelt on his neck for over eight minutes.

"We are announcing a joint commitment from Michael Jordan and Jordan Brand to donate $100m over the next 10 years. We must join forces with the community, government and civic leaders to create a lasting impact together," said Craig Williams, president of Jordan Brand.

"There is still more work for us to do to drive real impact for the black community. We embrace the responsibility."

Black lives matter. This isn't a controversial statement. We are you. We are a family. We are a community. pic.twitter.com/cGH8bJl1GQ

Jordan, a six-time NBA champion with the Chicago Bulls, spoke out about the 46-year-old's death and the killings of black people at the hands of police earlier this week.

Tweet
More in this category: « Premier League fixtures,Dates and kick-off times for remaining 92 games of 2019/20 season released. Bayern Munich move closer to Bundesliga title with a convincing win over Bayer Leverkusen. »
back to top