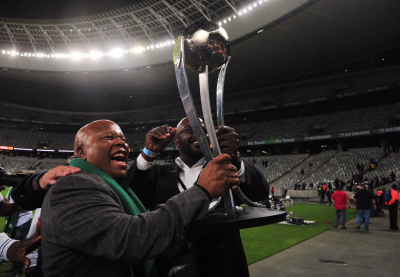 The Premier Soccer League have confirmed that Free State Stars owner Mike Mokeona has passed away.

Mokoena has a long history in the South African game, with his club one of the founding members of the National Soccer League in 1985, and a regular member of the top-flight until their relegation at the end of last season.

“Mike Mokoena was a self-made man that took the fruits of his toil, which he could have used for personal benefit and that of his family, and invested selflessly in football,” a statement from PSL chairman Dr Irvin Khoza said.

“He shined a light on a little known towns (QwaQwa and Bethlehem) in South Africa. The economic activity generated by Free State Stars in that part of the country is a powerful legacy of a passionate man that always maintained that “where there is a will, there is a way”.

Stars are currently in sixth position in the GladAfrica Championship, some five points off the promotion play-off positions with six games to play.

Mokoena’s son, Rantsi has been the long-time general manager of the team.

Tweet
More in this category: « Calling off South Africa’s biggest one-day road running event,was not an easy decision. Champions League & Europa League: Tournaments to be completed in ‘final eight’ format. »
back to top