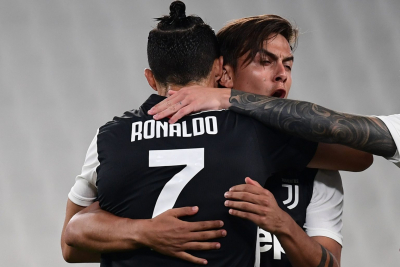 Cristiano Ronaldo scored his 23rd goal of the season as Juventus moved seven points clear at the top of Serie A with victory over 10-man Lecce.

Juventus, bidding for their ninth successive Italian title, moved to 69 points after 28 games.

The visitors had Fabio Lucioni sent off for a foul in the first half before Paulo Dybala struck from outside the box just after the break.

Ronaldo drove home a powerful penalty after being brought down before setting up substitute Gonzalo Higuain.

Defender Matthijs de Ligt then headed in a late third for the dominant hosts.

Ronaldo, who also scored a penalty in the 2-0 win at Bologna on Monday, has now scored 23 goals in 24 league appearances this season.

The win means Juventus extend their advantage over title rivals Lazio, who have a game in hand and could reduce the deficit back to four points if they beat Fiorentina on Saturday.

While Lecce remained third bottom on 25 points, behind Genoa on goal difference and one point adrift of Sampdoria in 16th spot.

Tweet
More in this category: « NBA - 16 players test positive for coronavirus. Sevilla held to a fourth consecutive draw in a 1-1 stalemate. »
back to top