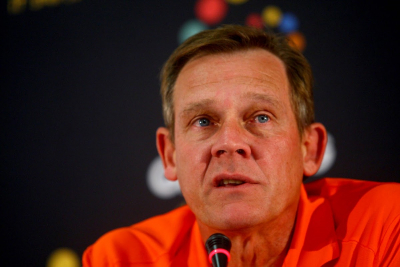 Neil Tovey will not have his contract as technical director of SAFA renewed at the end of June amid conflicting reports about the decision.

Tovey suffered several heart attacks in early 2015 and another late the following year.

However, the Business Day newspaper reported that a lack of financial support from the cash-strapped Safa restricted Tovey in his work.

"Health is not the major issue - money is. Neil felt hamstrung because he lacked sufficient funds to carry out his mandate," a top Safa official told AFP on condition of anonymity.

Tovey did not immediately comment on the decision by the national association to dump him.

As technical director, Tovey was tasked with training coaches in the country, whose national team has been a continuous source of disappointment for a decade.

Bafana Bafana are ranked only 13th in Africa - behind many countries with far smaller populations and limited facilities.

The news that Tovey will leave his post next week follows the axing by Safa of two of its vice-presidents — Ria Ledwaba and Gay Mokoena — in a national executive committee (NEC) meeting at the weekend.

This follows a tumultuous period in which two startling reports sent to the NEC by a former CEO‚ Dennis Mumble‚ and Mokoena (a former acting CEO) rocked the association with allegations of abuse of office by Safa president Danny Jordaan.

Tovey‚ who coached Mamelodi Sundowns and AmaZulu‚ was the Bafana captain who lifted the Africa Cup of Nations trophy on home soil in 1996.

Tweet
More in this category: « Sevilla held to a fourth consecutive draw in a 1-1 stalemate. Werder salvaged a relegation lifeline & Champions Bayern Munich ease to victory on the final day. »
back to top