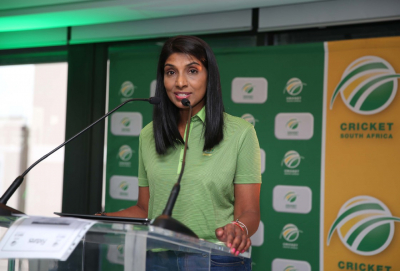 Mthethwa met the CSA Board on Monday and noted the departure of Faul from his position and the resignation of Chris Nenzani as President.

Mthethwa welcomed the swift action by CSA to appoint a replacement in Govender, from within the fold.

"The appointment will certainly show an improvement in the composition of the top structure of CSA’s management," said the department.

According to the Department of Sport, Arts and Culture, it was clear at Monday’s meeting that CSA was going through troubling times and any steps aimed at restoring stability to the organisation were welcomed.

“I still expect the undertakings made by the CSA at the meeting to be honoured and accordingly, look forward to CSA’s urgent response to the substantive issues I have raised with their delegation,” Mthethwa said.

The Minister has wished Govender success in her new role.

CONFIRMED: The Board of Cricket South Africa has announced the appointment of Kugandrie Govender as acting Chief Executive Officer of CSA with immediate effect. pic.twitter.com/5p2mBkiFif

Tweet
More in this category: « Bayern Munich advance to the Champions League final after beating Lyon. Premier League 2020-21 fixtures announced:Liverpool to face Leeds. »
back to top