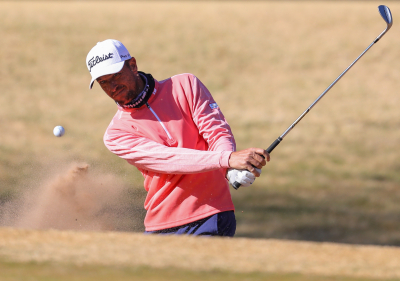 Alex Haindl will take a one-stroke lead into Friday's final round of the Betway Championship on the Sunshine Tour. Haindl signed for a second round of 67 to lead the field on three under par 137. Credit: Carl Fourie/Sunshine Tour.

The hours spent working on about the only thing a golfer can do during lockdown – putting – paid off for Alex Haindl as he signed for a 67 to take a one-stroke lead going into Friday's final round of the Betway Championship on the Sunshine Tour's new Rise-Up Series.

Haindl made some big birdie putts and equally important par saves at Killarney Country Club on Thursday to top the leaderboard on three under par 137 overall.

His nearest challenger is a resurgent Anton Haig, who signed for a second consecutive 69 and whose recent history with Killarney Country Club is a perfect match for this week's sponsor – Betway. "I recently joined a group of golfers who play quite a few money games at Killarney. It's helped me so much playing here a lot more in recent weeks. I've had probably about 10 practice rounds here in the last couple of weeks," he said.

And just two shots off the lead is the vastly experienced duo of Ulrich van den Berg and Adilson da Silva.

But after a first round of 70 and then a second round of 67, Haindl definitely feels like he's moving in the right direction as this tournament progresses. And his putting – particularly in the stretch of three birdies in five holes after the turn – has been a large part of that process.

"I turned level par and then made a 20-footer for birdie on the first. I had a good chance on two and didn't make that, but then on the third I made a 10-footer for birdie. The fifth is a par five and I made birdie there as well. I was also good out of the bunkers today and had a few good up-and-downs. Your short game is key on this course because you do miss a lot of greens. The course has been playing very firm and fast and it's been difficult to get close to any of the pins. It's been tricky," said Haindl, a three-time winner on the Sunshine Tour whose last victory came in 2018.

"I've been working hard during the lockdown. But you don't know what to expect until you test it in competition. You can only do so much hitting into a net in your garage. But it's nice to see the game is decent. It's just a case of sharpening it up now."

Friday's final round will be streamed live on DStv Now Channel 241 and on the Sunshine Tour's platforms on YouTube and Facebook from 12-3pm.