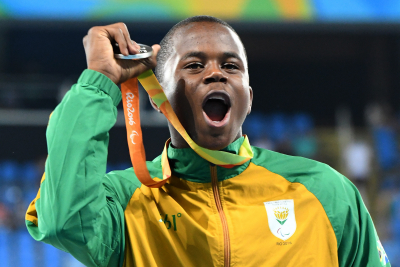 Team South Africa’s young rising star in the Paralympic Movement, Ntando Mahlangu, is one of nine Paralympians who are featured in the Netflix documentary 'Rising Phoenix', a movie to be launched on 26 August 2020.

'Rising Phoenix’ is a ground-breaking movie about the Paralympic Movement, which will showcase in over 190 countries worldwide on Netflix.

Featuring Paralympians from across the world, 'Rising Phoenix' tells the extraordinary story of the Paralympic Games and inspiring athletes who show us what is possible when we push the limits of human movement, emphasising that disability is not inability.

The film's release was planned to coincide with the Tokyo 2020 Paralympic Games. Due to the postponement of the games it will now form part of the one-year-to-go celebrations. The 24th of August 2020 marks the year-to-go milestone before the opening ceremony of the Tokyo Paralympic Games in Japan on 24 August 2021.

Ntando’s Accolades include, but are not limited to the following:

Tweet
More in this category: « Haindl likes his odds in Betway Championship. Cameroon 2021 qualifiers resume November, Qatar 2022 set for May 2021. »
back to top