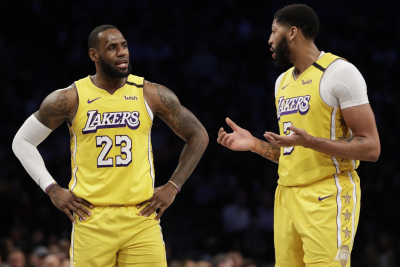 The Los Angeles Lakers beat the Portland Trail Blazers 111-88 to level their Western Conference play-off series at 1-1 in Orlando, Florida.

Anthony Davis top-scored for the Lakers with 31 points in their first post-season win since the 2012 semi-finals.

Portland's star player Damian Lillard dislocated his finger during the loss but is expected to play in game three.

In the Eastern Conference play-offs, the Milwaukee Bucks beat the Orlando Magic 111-96 to make that series 1-1.

Last season's MVP Giannis Antetokounmpo scored 28 points and made a game-high 20 rebounds for the Bucks.

The Miami Heat overcame the the Indiana Pacers 109-100 in the other Eastern Conference play-off round-one series to take a 2-0 lead in the best-of-seven contest.

In the Western Conference, James Harden led the Houston Rockets to a 111-98 win over the Oklahoma City Thunder for their second win of the series.

Tweet
More in this category: « Cameroon 2021 qualifiers resume November, Qatar 2022 set for May 2021. Harry Kane in quarantine but expected to be fit for England. »
back to top