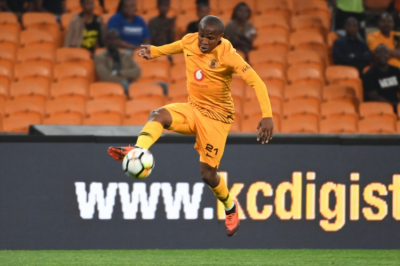 Kaizer Chiefs will look to get their Absa Premiership title chase back on track when they host Stellenbosch at Orlando Stadium later this evening.

Their result against Bloemfotein Celtic sees them head into today's match with a five-point lead over nearest chasers Mamelodi Sundowns, who have drawn with Maritzburg United on Friday evening.

With the title race now wide open again, Chiefs manager Ernst Middendorp admitted his team took their foot off the pedal and will have to be better for the clash against Stellenbosch.

"This is definitely not about smaller teams, bigger teams, whatever team you're playing. Every team is a big team and every team has a certain issue,” said Middendorp.

“Now with these baggages, we should be disappointed, no doubt about it. We have not really approached it like we wanted to win, like we wanted to do it, to make another big step, good. That is where we have to discuss ourselves in the next days to be better prepared on Sunday.”

Meanwhile Stellenbosch picked up a second straight win when they defeated local rivals Cape Town City 1-0 on Thursday evening, with a first career league goal from Leletu Skelem. The result sees them guarantee top-flight football for next season, and they can even look at possibly breaking into the top eight.

With the pressure of relegation banished, Stellies coach Steve Barker is eager to see his side continue to build on the momentum they have created.

“We’ve got some difficult encounters coming up, starting with Chiefs on Sunday,” said Barker. “That’s not going to be easy for us, obviously they have their own ambitions of [winning] the league, we’ve got our own ambitions.

“I just think [the two wins since the restart] have given us a good foundation to be able to go on Sunday and the pressure is not on us. We have to go and give a good account of ourselves and we can try put some pressure on the teams above us.”

In head-to-head stats, Chiefs and Stellenbosch have met in just one previous league match. That encounter took place earlier this season – at the Cape Town Stadium in November 2019 – and saw the Amakhosi record a 4-0 away win thanks to goals from Siyabonga Ngezana, Samir Nurkovic (two) and Dumisani Zuma.