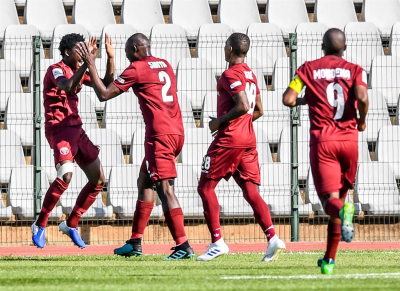 Swallows FC have moved top of the table in the race for automatic promotion from the GladAfrica Championship.

Kagiso Malinga and Zanempi Methula scored goals as Swallows defeated Richards Bay 2-0 to move to the top of the table with one round of fixtures remaining, closing in on a return to the top-flight for the first time since the 2014/15 campaign.

Ajax Cape Town went 2-1 down to JDR Stars, their poor form seeing them blow a nine-point lead at the top of the table.

Both leaders have 54 points, but Swallows head the table on goal-difference with +11 compared to Ajax’s +10.

Should they finish on the same points and goal-difference, Ajax would hold the advantage with more goals scored, 47-38 in their favour.

Swallows host third-place Tshakhuma Tsha Madzivhandila and Ajax take on relegation-threatened Mbombela United in the final round on Sunday.

Meanwhile the final relegation spot will also be decided on Sunday, with Royal Eagles already consigned to the ABC Motsepe League.

Jomo Cosmos moved out of the bottom two after they played to a 1-1 draw with Steenberg United.

Their place was taken by TS Sporting, who lost 2-0 to Real Kings and go into the final round in real danger of the drop.

It would appear to be a straight shoot-out between Sporting and Cosmos, who face Cape Umoya United and University of Pretoria on the final day respectively.

Twitter
More in this category: « England vs Pakistan: England settle for a draw in the final Test against Pakistan. Sunshine Tour - Rohwer on the rise. »
back to top