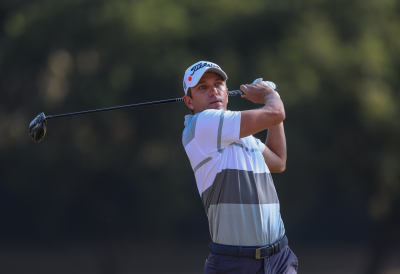 Martin Rohwer opened with a bogey-free seven-under-par 65 to lead the first round of the African Bank Sunshine Tour Championship by a single stroke at Glendower Golf Club on Wednesday. Carl Fourie/Sunshine Tour.

Martin Rohwer's form on the Sunshine Tour's new Rise-Up Series is indeed on the rise as the KwaZulu-Natal professional took the first-round lead in the African Bank Sunshine Tour Championship at Glendower Golf Club on Wednesday.

Rohwer hit the top of the leaderboard only a few days after finishing seventh in last week's Betway Championship, and he did so with a bogey-free round of seven-under-par 65 that started with a birdie on the 10th – his first hole – and ended with three consecutive birdies.

He holds a one-stroke lead over the field. Lyle Rowe is his nearest challenger following a 66, while young star Jayden Schaper is in a group of players who opened with rounds of 67. Darren Fichardt is three off the lead and looking for back-to-back wins on the series.

Rohwer is certainly looking to make the most of this new series of five tournaments. He had a busy schedule of international tournaments planned, including an exemption into the Second Stage of the European Tour's Qualifying School, before COVID-19 changed all of that.

"I was going to go to Europe for a few Challenge Tour events and then the European Tour's Qualifying School. I was also exempt into the Alfred Dunhill Links Championship over there until that all changed. But fortunately my exemptions will carry through to next year. So I'm just going to play as many tournaments as I can here and do as well as I can," he said.

Rohwer's current form is in line with his start to 2020 when he finished tied sixth in the South African Open hosted by the City of Johannesburg in January.

"I played well in January and February, so it's good to see that I've maintained that form after lockdown. I'm extremely happy with my 65 today. I hit the ball well from tee to green and I gave myself chances throughout the round. I drove the ball really well and hit most of the fairways, so I had a lot of birdie chances out there."