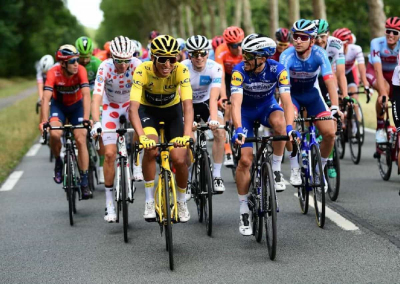 Alexander Kristoff timed his sprint finish to perfection to win the opening stage of the Tour de France in Nice.

After a large group crashed inside the final 3km, Norwegian Kristoff, 33, surged home in a sprint also involving Ireland's Sam Bennett, who was fourth.

Rain made the roads treacherous and led to several crashes, with Pavel Sivakov of Team Ineos twice coming off.

Colombia's Nairo Quintana crashed, while Astana's decision to up the pace on the final descent from Levens saw Miguel Angel Lopez slide into a road sign and prompted some stern exchanges towards the team from other riders in the peloton.

France's Julian Alaphilippe was also caught in a crash, while compatriot Thibaut Pinot - one of the race favourites - fell heavily towards the end and rolled over the line with a ripped jersey.

However, because the crash happened inside the final 3km, he was credited with the same time as the group he was riding with, so ended up losing no time on his rivals for the overall win.

The riders face a 186km mountainous second stage on Sunday, with two climbs above 1,500m.

Twitter
More in this category: « Arsenal edged Liverpool on penalties after an entertaining encounter at Wembley. Amazulu boosted their chances of avoiding relegation with a win over Leopards. »
back to top