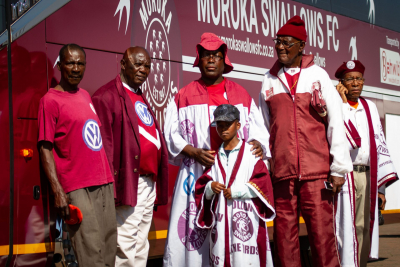 Swallows FC are back in the top flight of the PSL after a 3-0 victory over Tshakuma Tsha Madzivhandila (TTM) on the final day of the GladAfrica Championship season.

They went into the break two-goals up, courtesy of Kagiso Malinga and Given Thibedi, while Ajax managed just a single goal at halftime through an early strike from Sonwabile Mfecane.

Swallows ensured that Ajax had a mountain to climb in the second half, with Malinga completing his brace on the hour-mark to make it 3-0.

They walked away with a cool R3 Million cheque, gold medals and trophy after their 3-0 win over Tshakhuma Tsha Madzivhandila in Tembisa.

Meanwhile Ajax will hope that they can still return to the Premiership next season via the gruelling relegation/promotion play-off as their 3-0 win over Mbombela United could only ensure a second-place finish.

Ajax will play the three-game round-robin fixtures against TTM, who are guaranteed a top-three finish despite their loss, and a top-flight side that will finish 15th in the Absa Premiership.

The playoffs kick off on Sunday, 6 September and run until the 21st.

Twitter
More in this category: « Novak Djokovic resigns as the ATP player council president. Lewis Hamilton cruises to Belgian Grand Prix victory to continue his 2020 F1 dominance. »
back to top