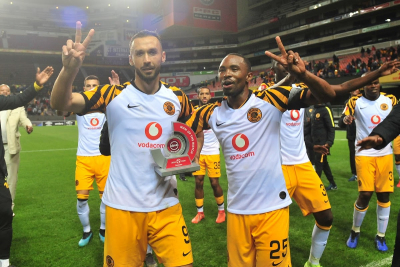 Kaizer Chiefs moved closer to the Absa Premiership title with a 1-0 win over Chippa United at Orlando Stadium.

Chiefs remain on top of the log on goal difference ahead of Mamelodi Sundowns (who defeated Polokwane City 2-0) and they can only match their rivals’ result on the final day of the season to clinch a first PSL title since 2015.

Itumeleng Khune's return was the headline news for the Chiefs line-up after Daniel Akpeyi was ruled out for the final two games and was handed the captain’s armband.

Amakhosi started strongly and claimed the lead in the ninth minute, with Samir Nurkovic flicking on a cross from the right flank to allow Khama Billiat to finish from close range and pick up just his second league goal this season.

Tercious Malepe was given his marching orders for cynically hacking down Billiat on a counter attack, with the referee of the opinion that the Chippa man had denied a clear goal-scoring opportunity.

The Chilli Boys continued to fight against the odds and were unlucky to have an equalising header from substitute Boikanyo Komane ruled out for a phantom foul on Khune.

Chippa finished the game with nine men as Elvis Moyo was sent off in the final two for a lunge on Ramahlwe Mphahelele.

The teams will wrap up their league season on Saturday 5 September: Chippa will host Golden Arrows at Orlando Stadium, while Chiefs will visit Baroka FC at Bidvest Stadium.