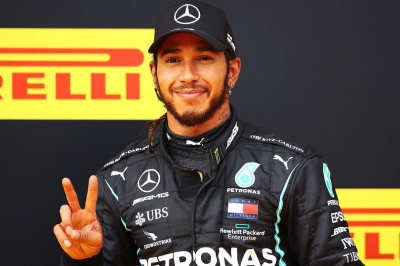 Hamilton's margin of 0.069 seconds was his sixth pole in eight races and puts him in the best place to score his 90th Grand Prix victory on Sunday.

It was the fastest qualifying lap in Formula 1 history, at 164.286mph, and Hamilton's 94th pole position.

Neither Ferrari made it into the top 10, with Charles Leclerc in 13th and Sebastian Vettel eliminated in the first session, in 17th place, after getting caught in an on-track mix-up as drivers jostled for the perfect position seeking a slipstream.

"It was not the easiest," Hamilton said. "You saw how close it was and it really demanded a clean lap.

"Valtteri was very close and pushing. I made some big changes going into qualifying and I was little nervous but it worked out just fine."

Mercedes decided not to pursue the tow for either driver, feeling that it was not an advantage against the competing benefits of running alone on the out lap to prepare the tyres properly and having maximum downforce in the corners.

The final two parts of qualifying were relatively trouble-free but the end of the first session was chaotic as drivers jostled for position, some blocking rivals as they fought on track as if it was a race.

And Renault's Esteban Ocon has been called to the stewards to explain his actions against Alfa Romeo's Kimi Raikkonen.

But for the first time since 1984, Ferrari were missing from the top-10 entirely in Italian GP qualifying.

Vettel became a victim to the end-of-Q1 traffic "mess" as drivers, much like last year, jostled for position at the start of their crucial flying laps in a bid to get a slipstream, with an angry four-time world champion unable to improve.

Esteban Ocon and Kimi Raikkonen came particularly close to colliding in that instance.

Leclerc, meanwhile, said there was no more he could do after qualifying 13th, 0.2s off a place in the the Q3 shootout.