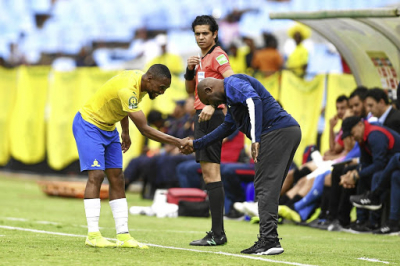 Mamelodi Sundowns have successfully defended their Absa Premiership title after a 3-0 win over Black Leopards.

Sundowns was slightly behind Kaizer Chiefs on goal difference, needing a four-goal swing in their favour between their match against Leopards.

It is a record fifth PSL title at the club for coach Pitso Mosimane who now becomes the outright most successful coach in the history of the league.

Meanwhile Chiefs needed only to match Sundowns result against Black Leopards, but after claiming the lead they were unable to push on and secure the three points – instead allowing Baroka back into the game to pick up a draw which ensures they avoid the relegation playoffs.

Amakhosi led 1-0 at the break,having been lucky to get away with a clear hand-ball from goalkeeper Itumeleng Khune outside of his penalty area in injury time.

Baroka claimed an equaliser on 59 minutes after Manuel Kambala got up highest to meet Gerald Phiri Jr’s in-swinging free kick and powered a header home to make it 1-1.

Chiefs made a triple substitution after the second-half cooling break, with Dumisani Zuma, Lazarous Kambole and Anthony Akumu coming off the bench in an effort to try and win the game. However, they created no clear chances against a resilient Baroka defence, which was able to hold out and secure a point which ensures they will play in the top flight next season – and deny the Amakhosi title glory.

Elsewhere Polokwane City’s seven-year stint in the top-flight of South African football ended on the last day of the 2019-20 Absa Premiership season after they were relegated following their 2-1 defeat to Bidvest Wits at FNB Stadium.

Leopards will fight for their survival against the GladAfrica Championship’s runners-up Ajax Cape Town and third-placed finishers Tshakhuma Tsha Madzivhandila.

Twitter
More in this category: « Pole for Lewis Hamilton, Ferrari problems worsen. Adam Yates holds on to yellow jersey as rivals close in - Tour de France. »
back to top