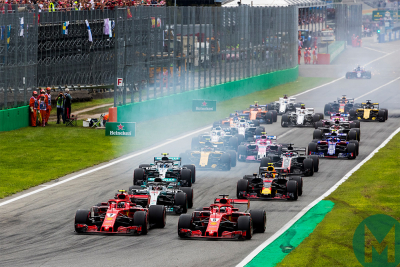 Pierre Gasly took a stunning win in the Italian Grand Prix for Red Bull's Alpha Tauri team in one of the most remarkable races in history.

Lewis Hamilton was dominating until he was penalised for being called into the pit lane for a stop when it was closed.

Two safety cars in quick succession mixed up the order and Gasly took the lead after Hamilton served his penalty.

McLaren's Carlos Sainz closed him down but the Frenchman just held him off to take his first grand prix victory.

"It's unbelievable," Gasly said after the race. "It was such a crazy race. We capitalised on the red flag. The car was fast out there, we had a pretty fast car behind us.

"I've been through so much in the space of 18 months. My first podium last year, I was already like wow with AlphaTauri, and now my first win in Monza. I'm struggling to realise [it]."

The result also comes a little over a year since he was dropped by Red Bull and returned to Toro Rosso due to poor form.

Gasly paid tribute to the team's support and faith in him, having made his F1 debut for Toro Rosso back in 2017.

Hamilton fought back from last place, 18 seconds off the back of the pack, to seventh, just two places behind team-mate Valtteri Bottas.

The race was red flagged after 27 laps for a big crash for Ferrari's Charles Leclerc at the Parabolica.

It capped a miserable race for Italy's main team after Sebastian Vettel had retired early on with brake failure.

A second F1 podium for ALL THREE of our podium heroes!