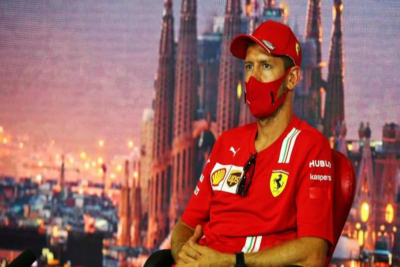 Vettel, 33, is moving to the team currently known as Racing Point from Ferrari, who earlier this year decided not to offer the German a new contract.

Aston Martin said signing Vettel was "a clear statement of the team's ambition" to establish themselves at the front.

"It's a new adventure for me with a truly legendary car company," said Vettel, who replaces Sergio Perez.

A statement from Aston Martin said Vettel had signed for "2021 and beyond" but did not confirm the length of the contract.

Typically, it would be expected the German has signed a three-year deal.

Vettel said: "I'm extremely proud to say I will become an Aston Martin driver in 2021.

"I have been impressed with the results the team has achieved this year and I believe the future looks even brighter.

"The energy and commitment of Lawrence [Stroll, the owner] to the sport is inspiring and I believe we can build something very special together.

"I still have so much love for Formula 1 and my only motivation is to race at the front of the grid. To do so with Aston Martin will be a huge privilege."

Team principal Otmar Szafnauer said the team were "hugely excited" by the news.

"Sebastian is a proven champion and brings a winning mentality that matches our own ambitions for the future as Aston Martin F1 Team," he said.