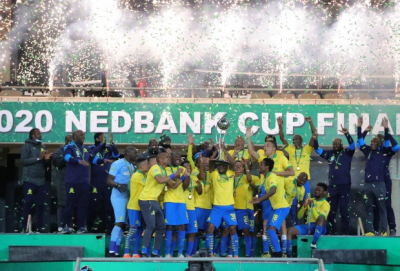 Bloemfontein Celtic have lodged a complaint with the Premier Soccer League (PSL) after Mamelodi Sundowns had the suspended Tebogo Langerman on the bench in their Nedbank Cup Final match.

While the player did not take to the field in the game,however rules stipulate that suspended players may not "be dressed and may not take part in any warm-up activities".

The NFL Handbook states: "If a Player's name appears on the team sheet he will be deemed, for the purposes of these Rules, to have participated in the match except if a Member Club removes a Player’s name from the team sheet before the match."

The exact punishment for this type of error or misconduct is up to the League, but the rules also state that Celtic will need to follow a number of specific procedures if they plan to follow through formally with their protest.

Langerman picked up a fourth booking in last weekend’s title clincher against Black Leopards, which ruled him out of the Nedbank Cup final.

The reliable sources at Premier Soccer League indicated that the Brazilians could face disciplinary action for including the suspended player in the squad.

However the PSL Disciplinary Committee could only hand Sundowns a fine as the game was not played under protest as Celtic only lodged their appeal after the final whistle.

A week ago, Mosimane's side were crowned league champions after overhauling Kaizer Cheifs’ 13-point gap, which they held before the league was brought to a halt by the coronavirus pandemic that has affected sport across the globe.