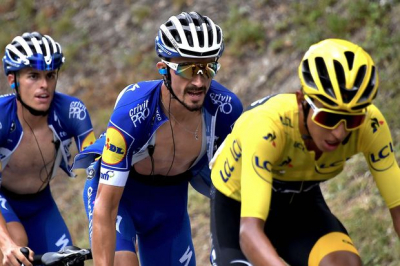 Pogacar beat yellow jersey Roglic in a sprint to the line and now trails his fellow Slovenian by 40 seconds.

Bernal cracked badly on the final climb to Grand Colombier and lost over seven minutes to slip from third to 13th overall.

Britain's Adam Yates moved up to fifth in the general classification.

Roglic was expertly delivered to the finish after another supreme display by his Jumbo-Visma team but Pogacar again showed he will attempt to reduce the deficit at every opportunity.

The 21-year-old UAE Team Emirates rider kicked clear late on to take his second stage win of the Tour and 10 bonus seconds, with Roglic second and Richie Porte in third.

"Jumbo-Visma set a really high pace all day and it made it a really difficult stage so I was just waiting for the sprint at the end and I'm so happy to win again," said Pogacar.

"The plan is to win the Tour de France. Primoz Roglic seems unstoppable but today Bernal cracked and maybe one day myself or Primoz will crack - there are still a lot of opportunities ahead."

After a rest day on Monday, the race resumes with a rolling 164km route from La Tour-du-Pin to Villard-de-Lans on Tuesday.