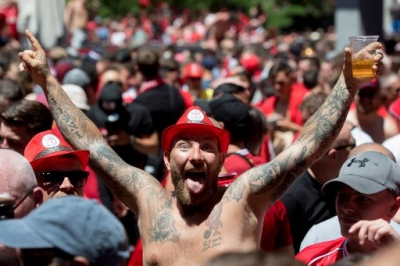 Prime Minister Boris Johnson has confirmed plans for fans to return to watch live sport events in England from 1 October will not go ahead.

The plans were placed under review after a rise in coronavirus cases.

The UK's Covid-19 alert level has moved to 4, meaning transmission is "high or rising exponentially".

"We have to acknowledge the spread of the virus is now affecting our ability to reopen large sporting events," said the prime minister.

In an address to the Commons on Tuesday, he announced new restrictions for the country and those included the halting of the phased return of fans.

"We will not be able to do this from October 1 and I recognise the implications for our sports clubs, which are the life and soul of our communities," he added.

"The chancellor and the culture secretary are working urgently on what we can do now to support them."

The prime minister also said current restrictions are likely to remain in place for the next six months.

The pilot programme, which was to trial events of up to 1,000 spectators, has also been paused.

The majority of sports in England have been played behind closed doors since the coronavirus lockdown in March, including Premier League football, the FA Cup final, England's Test cricket matches and two Formula 1 races at Silverstone.

Sport events that took place with full crowds in March shortly before all fixtures were postponed and the UK locked down have come under scrutiny.