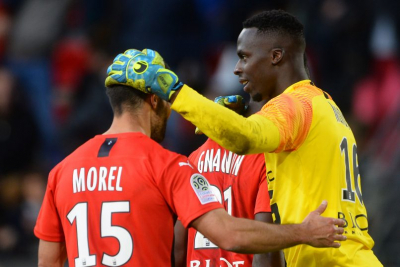 The Senegal international, 28, made 25 league appearances for the Ligue 1 side after joining from Reims in 2019.

He completed his medical on Tuesday, with manager Frank Lampard having said he wants to increase competition with club record signing Kepa Arrizabalaga, who cost £71m.

"I'm so excited to be joining Chelsea," Mendy said. "It's a dream for me to be a part of this exciting squad."

He follows in the footsteps of former Chelsea keeper Petr Cech, who joined the Blues from Rennes in 2004 and is now the club's technical and performance advisor.

Chelsea director Marina Granovskaia said: "As soon as Petr Cech and our technical team identified Edouard as the most suitable goalkeeper to complement our existing group, there was only one player we wanted to bring in.

"Edouard arrives following a season of real success with Rennes, he is ambitious for more, and we welcome him to our club."

Tweet
More in this category: « Kai Havertz scores hat-trick as Abraham, Barkley and Giroud net. Uefa to keep five substitutions rule in competitions until end of 2020/21 season. »
back to top