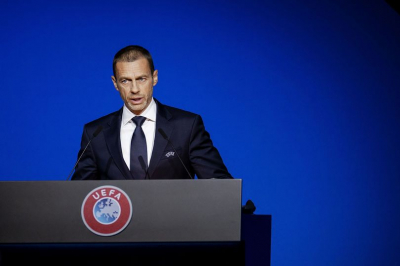 Teams will be allowed to make up to five substitutions in Uefa competitions until the end of the 2020-21 season.

The rule change was proposed by Fifa because of congested fixture schedules caused by the coronavirus pandemic.

In August, the Premier League said it would not adopt the rule change after clubs voted against it.

But Uefa president Aleksander Ceferin said it would be used in European competitions such as the Champions League and Europa League.

It will also be adopted in European national team matches, including the Nations League.

However, a decision has yet to be made on whether the rule will be adopted for next year's rearranged European Championships.

"After representations from clubs and national associations the executive committee approved the use of five substitutions in club and international matches for the rest of the season," he said.

"This is the right decision and a good first step to ease pressure on elite-level players," said the organisation's general secretary Jonas Baer-Hoffmann.

"We will continue to push for further innovative ways to reduce their mounting workload and protect their health and performance."

Premier League managers were allowed to name 20 players and make five substitutions when the 2019-20 season resumed from its coronavirus shutdown, but it has now reverted to squads of 18 with three permitted changes.

Tweet
More in this category: « Chelsea sign Senegal goalkeeper,Edouard Mendy from Rennes. Fernando Alonso reveals why he chose 2021 specifically to return to F1. »
back to top