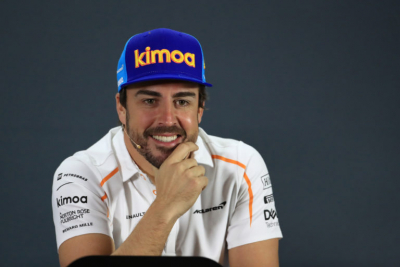 Fernando Alonso says he decided to return to Formula 1 because he loves the sport.

The two-time F1 champion, 39, said he had completed his “check list” of other things to do in his two years away.

Alonso said: “It’s not I was missing it or want a rematch. The two years outside there were things I wanted to do more than driving an F1 car.

“I did them and now it’s time to return. I love to have a racing car in my hands every two weeks.”

He said he felt Mercedes’ domination of the sport was a good opportunity to fulfil some other ambitions.

Alonso has signed to race for at least the next two years for Renault, which will be renamed Alpine from 2021 after the French manufacturer’s sporting brand.

In his two years away from F1, Alonso won Le Mans twice and the World Endurance Championship, and competed in the Dakar Rally and the Indianapolis 500.

He said the one-year delay until 2022 in the introduction of new regulations aimed at closing up the field had given him pause for thought but that ultimately he felt it was a good idea to come back for a year of preparation in 2021.

“All those things I did have helped me to liberate my mind from the desires I had and F1 is still in a time there is no great competition,” he said.

“So I thought this was a good time to do the things I wanted to do and then return now with the new regulations in force for 2021.

“That has been postponed to 2022 and I had a time when I didn’t know what to do - do I wait until 2022 and wait for the new regs or return next year and start with a warming up and working with the team? That’s what I went for.”

Alonso was speaking at a news conference timed to coincide with the launch of a new fly-on-the-wall documentary series on Amazon Prime charting his life over the past year.

Tweet
More in this category: « Uefa to keep five substitutions rule in competitions until end of 2020/21 season. Rugby Championship schedule has been confirmed. »
back to top