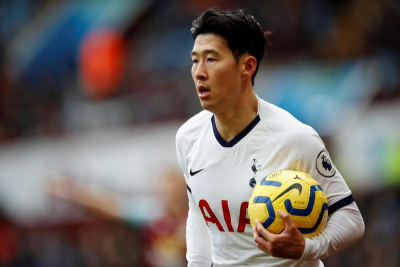 Son Heung-min scored one and set up two as Tottenham advanced to the Europa League play-off round after a scare against Shkendija in North Macedonia.

Joe Hart, who was making his Spurs debut, was beaten by a stunning 20-yard finish by Valmir Nafiu.

But Son drilled in the second before setting up Harry Kane for the third.

It was a decent performance by Jose Mourinho's side, who meet Maccabi Haifa at Tottenham Hotspur Stadium in the play-off round next Thursday.

However, they went from dominating the tie to hanging on before two goals in the space of nine minutes put the game out of Shkendija's reach.

Soon after Nafiu's wonderful equaliser from outside the box, Besart Ibraimi had a chance to put the hosts ahead but headed wide.

Spurs regained control thanks mainly to another excellent performance by Son, who produced an excellent cross for Kane's headed goal, and Tottenham's third.

Having scored four of his side's five goals at Southampton last Sunday, the South Korea forward produced another classy performance to help his side advance.

? This guy in his last two games:

Tweet
More in this category: « PSL confirmed DStv as the new sponsors of the League. Man City, Liverpool advance in League Cup. »
back to top