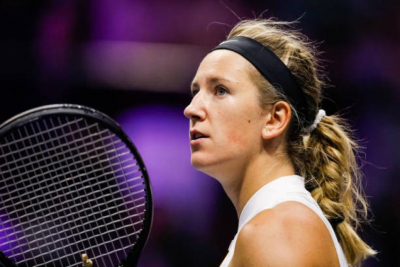 A frustrated Victoria Azarenka reached the French Open second round after briefly refusing to play in "completely ridiculous" conditions in Paris.

At 2-1 in the opening set, Azarenka left the court after a debate with officials, saying it was "too cold".

The Belarusian 10th seed, wearing a jacket and leggings, eventually returned to beat Montenegro's Danka Kovinic 6-1 6-2 in just over one hour.

She will face Venus Williams or Anna Schmiedlova in her next match.

"I'm glad that I'm able to finish and now I can watch everybody struggle with this weather," said Azarenka, who was runner-up at this month's US Open in her first Grand Slam final for seven years.

"I'm happy for quite a strong start. It wasn't easy but I felt I was pretty focused."

This year's French Open was delayed from its usual spot at the end of May because of the coronavirus pandemic and the autumnal setting has brought new challenges.

The weather forecast in Paris on Sunday was for gusty winds and rain and highs of 14C.

Meanwhile promising Italian teenager Jannik Sinner knocked 11th seed David Goffin out of the French Open with a 7-5 6-0 6-3 victory on the opening day.

It was his second successive win over the Belgian, whom he beat in the second round at Rotterdam in February.

After a tight opener, Sinner, the Next Gen ATP champion, won 11 games on the bounce en route to victory.

Tweet
More in this category: « In case you missed it:Watch:Bulls vs.Sharks,Lions vs. Stormers. Valtteri Bottas takes advantage of Lewis Hamilton penalties to win Russian Grand Prix. »
back to top