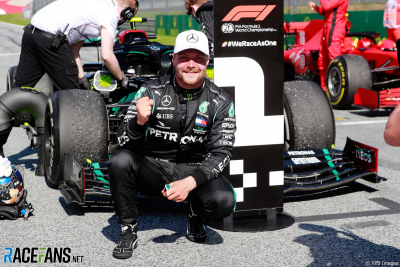 Lewis Hamilton's quest for the all-time record of Formula 1 wins was put on hold when he was hit with penalties at the Russian Grand Prix.

Hamilton's transgressions put him on the verge of a one-race because of accumulated licence penalty points.

Hamilton and the Mercedes team made the victory easy for Bottas with their collective failure to know the rules on practice starts before the race, but the Finn might have won anyway.

He was on the better strategy - starting on the medium tyres while Hamilton was on softs after a chaotic qualifying session for the Briton - and was tracking Hamilton in the early laps waiting for the race to play out.

But two five-second penalties, each for practice starts in the wrong place on the reconnaissance laps before the cars go to the grid, took Hamilton out of the equation.

Hamilton will have to wait another couple of weeks to match Michael Schumacher's record.

Confirmation of the win for @ValtteriBottas - the ninth of his career and his first since Round 1 in Austria in July#RussianGP ?? #F1 pic.twitter.com/qDRJPGg4YU

Tweet
More in this category: « Victoria Azarenka through to round two but slams 'cold' conditions at French Open. Bamford continue his brilliant start to the season with a late header to give Leeds victory. »
back to top