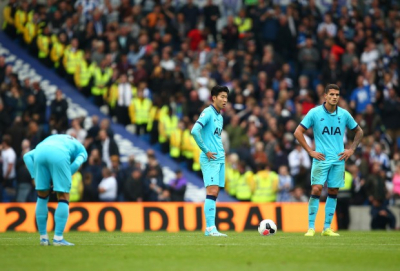 In a game they controlled from almost start to finish, Lucas Moura slotted the hosts ahead when Harry Kane again turned provider to tee up the Brazilian for his first goal in 22 Premier League games, as the woodwork and some superb goalkeeping from Karl Darlow kept the scoreline respectable in Newcastle's favour by the break.

Jonjo Shelvey could have provided the Magpies with a shock equaliser on the stroke of half-time but saw his volley whistle wide of the far post, while Jeff Hendrick wasted one of few chances in the second half, despite the visitors' improving on a dismal opening 45 minutes.

In a weekend already fuelled by handball drama at Brighton and Crystal Palace, Newcastle were awarded a 93rd-minute penalty out of nowhere as, after checking the pitchside monitor, referee Peter Bankes adjudged Eric Dier had handled in the area - a decision which saw Jose Mourinho storm out of the dugout and down the tunnel - before Wilson beat Hugo Lloris from the spot for an equaliser both sides could barely believe had materialised.

The Premier League admitted at the start of the season there would be more penalties for handball. And they were right.

Dier's arms were not next to his body and that is why it was a penalty by the new laws, although football fans, managers, players and pundits all agree it has to change.

Tweet
More in this category: « Bamford continue his brilliant start to the season with a late header to give Leeds victory. Bayern suffer 4-1 loss at Hoffenheim to end their unbeaten run. »
back to top