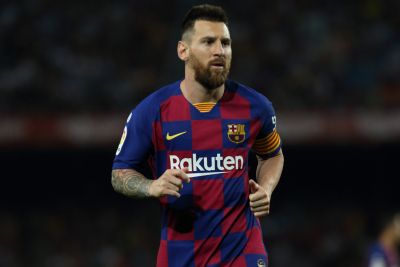 Ansu Fati was the game's outstanding player and scored Barca's first two goals, with a first-time finish from a Jordi Alba ball and then a low drive from Philippe Coutinho's pass.

He won the penalty which Messi scored.

Barca had the game wrapped up by half-time as Pau Torres turned Messi's cross into his own net.

Unai Emery's Villarreal offered little opposition, with their only shot on target coming in the final minute.

Messi is the sixth player to score a goal in 17 different La Liga seasons, joining Real Madrid's Sergio Ramos, who joined that club on Saturday.

Meanwhile Cristiano Ronaldo scored twice as 10-man Juventus came from behind to draw 2-2 at Roma in Serie A on Sunday.

Juve twice fell behind to goals from Jordan Veretout - the first a penalty awarded for handball and the second a drive, assisted by Henrikh Mkhitaryan.

Ronaldo levelled the first with his own penalty, also given for handball.

Adrien Rabiot was then sent off for the visitors for a second bookable offence but Ronaldo salvaged a point with a towering header from Danilo's cross.

The game was the second of Andrea Pirlo's managerial reign at Juventus and was the first points dropped after their opening 3-0 win over Sampdoria.

Roma are down in 13th on one point, as their opening day 0-0 draw against Hellas Verona was changed to a 3-0 defeat by Serie A because they fielded an ineligible player.

Elsewhere Jarrod Bowen scored twice as West Ham registered their first Premier League win of the season against a disappointing Wolves side.

The result lifts the Hammers from 18th up to 10th in the table, with Wolves dropping down to 16th.