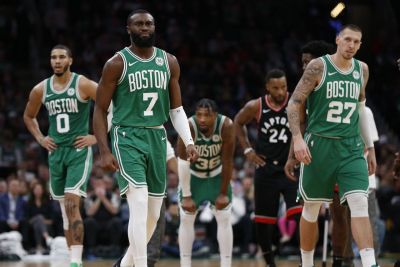 The Miami Heat reached the NBA Finals for the first time since 2014 as a 125-113 win over the Boston Celtics wrapped up a 4-2 series victory.

The three-time NBA champions will play Western Conference winners Los Angeles Lakers in the best-of-seven finals, with game one on Wednesday.

Bam Adebayo top-scored for the Heat with a career-high 32 points and 14 rebounds, while Jimmy Butler added 22.

Adebayo had shouldered the blame for the Heat's loss in game five but "left it all on the court" to redeem himself on Sunday.

"I had to realign myself with who I really want to become and I showed that tonight," he said.

"Being in that moment and embracing it and taking over as we win the conference finals is a great thing for me."

Head coach Erik Spoelstra led the Heat to back-to-back NBA titles in 2012 and 2013 when LeBron James starred for the franchise.

James will be on the opposite side of the court this time around having led 16-time champions the Lakers to their first NBA Finals in 10 years.

"The main key, and it's been like this for a very long time, if you want to win, you're going to have to go through a LeBron James-led team," said Butler.

"At the end of the day, that's what it normally comes down to, and that's what we got to focus in on. Honestly, we can't just focus in on him because he has so many really good players around him.

"But you're going to get the same test over and over again until you pass it. That test is LeBron James."

Tweet
More in this category: « Koeman era begins with inspired 4-0 rout of Villarreal,Ronaldo rescues a point for Juventus. 2020 Mzansi Super League postponed to 2021. »
back to top